Test Your Pet-Keeping Skills with Rabbitville 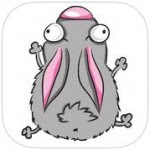 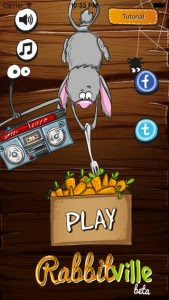 Rabbitville [1] is a charming app by Anton Remizov [2] with a rather hilarious concept for a storyline. Featuring hungry rabbits in a fairly natural state of being, Rabbitville highlights a bit of the humor in taking care of pets.

Rabbitville is a game featuring the lives of rabbits, just like its name states. However, unlike many iOS games where animals are either given vicious personalities or made to be overly-friendly talking main characters, Rabbitville provides its players with an undeniably more natural storyline.

Players in the game are in charge of taking care of varying numbers of this herbivorous pet. This includes making sure to feed them the right things when theyâ€™re hungry and be careful to rid their areas of their scat after theyâ€™re satisfied.

In addition to this unique game concept, Rabbitville also features unique ways to accomplish each taskâ€"from screen-tapping to physically shaking the iOS device.

The game also has a couple different level packs featuring different scenes. Â However, while concepts behind the game are fun and unique, I found that I often experienced lag or what seemed like little â€œbugsâ€ while playing Rabbitville. For instance, sometimes rabbits would â€œdieâ€ but still remain on the screen, and issues like this made playing Rabbitville to be frustrating at times. 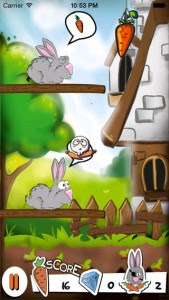 The layout of Rabbitville is very user-friendly and simple to navigate, even for children. Additionally, the graphics of the game are fun and fitting for the storyline; cartoon-like rabbits simply make sense for a game focused primarily on feeding bunnies and preventing their feces from overwhelming them.

I was particularly impressed with the little details with which the various scenes and objects in the app were designed. Fonts used in Rabbitville were also easy to read. However, I was disappointed to see a few grammatical errors sprinkled throughout the app. Ideally an app with such great graphics, layout, and font choice would also have good grammar to round out its appearance.

Rabbitville is a fun, unique game that certainly has potential. However at $1.99, this app also seems a bit overpriced for what it has to offer. Even if Rabbitville didnâ€™t have any bugs, it would still seem hard to justify spending a couple of dollars on an app with a somewhat repetitive game plan.

Overall, this app is undeniably a unique concept, and will hit the spot for some animal-loving gamers. However, uniqueness alone may not push this game over the top for many others. 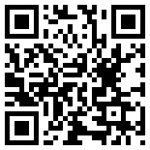 Rabbitville [3] requires iOS 6.0 or later. Compatible with iPhone, iPad, and iPod touch. This app is optimized for iPhoneÂ 5.Â A small expedite fee was paid to speed up the publication of this review.

Find your next iPhone app at TheiPhoneAppReview.com

What do YOU think? Weâ€™d love to hear your comments, try it and let us know!

from your own site.

Pubblicato da Illuminator a 9:10 AM
Email ThisBlogThis!Share to TwitterShare to FacebookShare to Pinterest