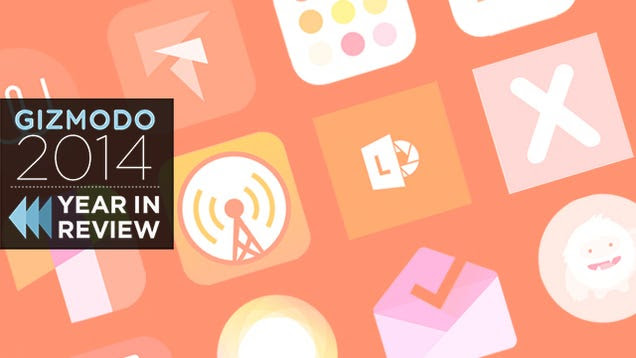 The smartphone in your pocket today makes whatever handset you had just two years ago look laughably bad. That's not just because of better sensors and better software; the apps that power them have improved in kind.

In 2014, these new iOS, Android, and Windows Phone apps were 100 percent worth downloading. Some improved dramatically on existing ideas, others took what was once incredibly complex and made it simple, and a few just did cool shit. Whatever the case, smartphone apps took another step forward this year, and with what we already know that's in our future (Windows 10, anyone?), I can't wait to see what's next.

For the best app games, check out the iOS [1] and Android [2] picks from our friends at Kotaku. 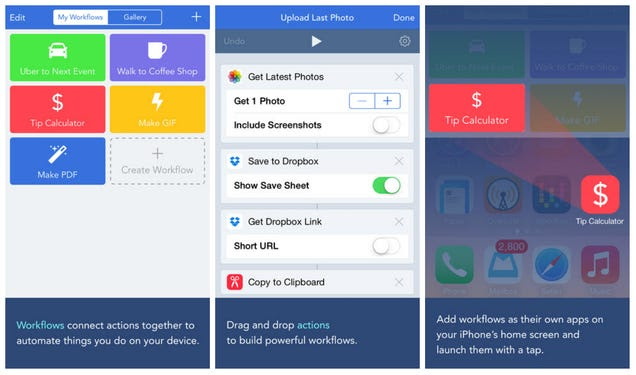 Workflow is the perfect example of keeping it simple (stupid). Apps like Drafts [4] have given iOS users automation abilities for some time now, but Workflow simplifies that process [5] and makes it much more accessible for your average, everyday iPhone user. For those whole like to embrace the promise that technology truly can make our lives easier, Workflow is a must. [iOS [6] ] 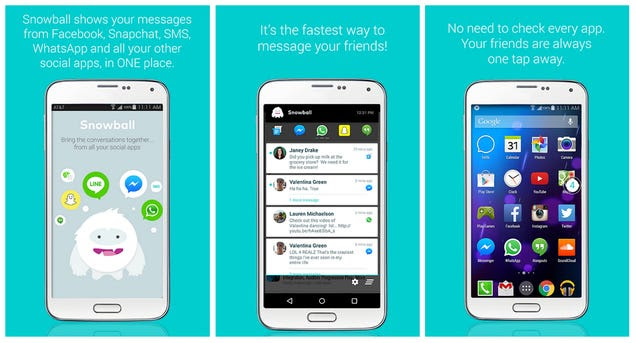 On my smartphone I have SMS, Messenger, WhatsApp, Slack, and Hangouts. The amount of mpm (messages per minute) I receive is out of control, so I need an app to help tame the digital chaos. Enter: Snowball. The idea behind the app is simpleâ€"corral all major messaging services into one place so you can browse and dismiss more easily. Snowball also adopts Facebook's chat heads so any message will always be present on your screen, and if you find chat heads annoying, you can just disable it. Plus, the app has a Yeti for a mascot, which is adorable. [Android [8] ] 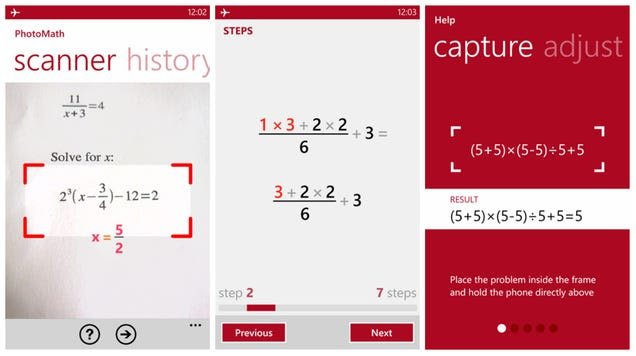 Math and I have a contentious relationship, meaning I pretty much suck at it. But if I had Photomath in high school, I might have stood a chance. Take a picture of math equation with your camera, and boomâ€"the app churns out an answer with step-by-step analysis. It's more of a learning tool than a cheating tool, but I'm not going to tell you how to use it. [iOS [10] and Windows Phone [11] ] 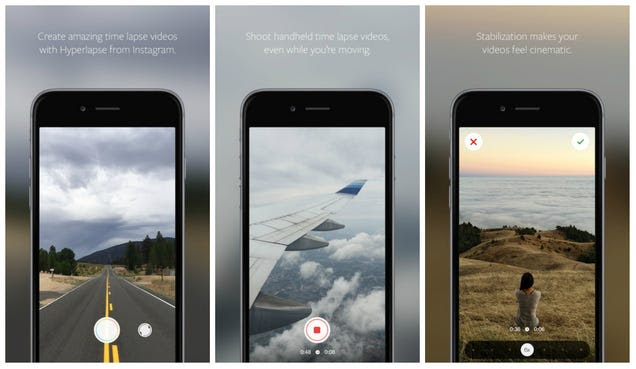 From the creators of Instagramâ€"you know, that one app that has more users than Twitter [13] â€"comes Hyperlapse, the super-easy way to create time lapses on your iPhone. The beauty of the app is in its simplicity. Shoot a hyperlapse (or selfielapse), edit the speed, and that's it. What use to take professional photographers hours to complete just took you minutes. For free, it doesn't get much better than that. [iOS [14] ] 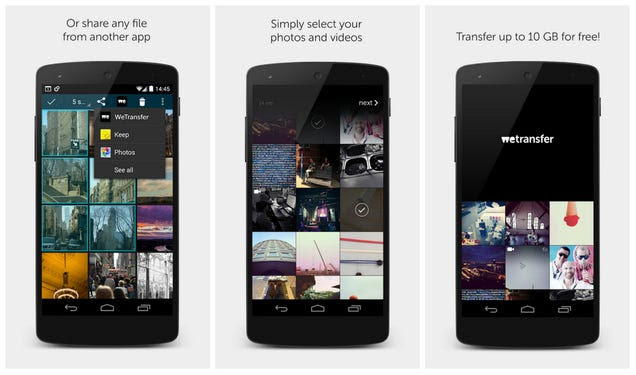 Sending large files on any device pretty much sucks. Email clients hit data caps, and you're left sending multiple emails, and compressing, compressing, compressing. There's a better way, and it's WeTransfer. The free app lets you send up to 10GB of data quick and easy. The app simply sends a download link to whatever or whomever you're trying to reach. It's a must-have if you're constantly slinging gigabytes among your various devices. [iOS [16] and Android [17] ] 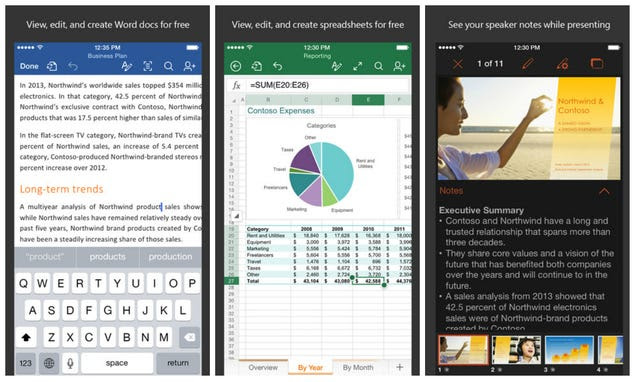 Until 2014, editing Microsoft documents on mobile devices made me want to cry. Bundled into an all encompassing app, the tools and abilities were drastically restricted and borderline pointless. Earlier in the year, Microsoft released Office for iPad and quickly followed up with mobile versions in the fall for iPhone . The app is completely redesigned to take advantage of the device you're using, and Microsoft also opened up a lot of features for free to users with only pro tools hiding behind a subscription. Who said you can't be productive on the go? [iOS [19] ]

This year, Google tried to solve one of the hardest mobile software questions: Email. What it came up with was an Inbox, a separate app from standard email that integrates Mailbox-like snooze features and a more glance-friendly interface. The app is still languishing in an early invite-required beta, but out of the gate, it's a pretty impressive attempt. [ iOS [21] and Android [22] ] 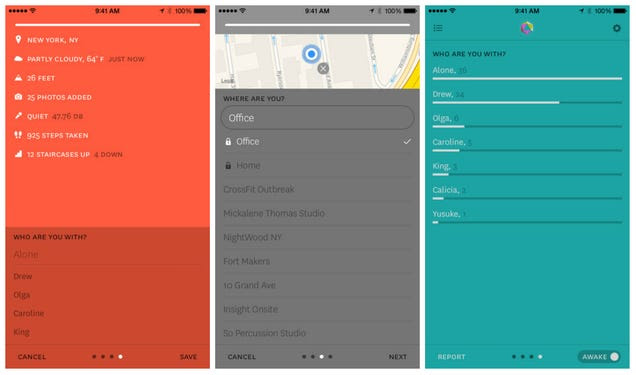 The biggest headache with the quantified-self trend is remaining vigilant in logging data and keeping track of your activity. Reporter tries to simplify things by pinging you several times throughout the day and creating a short quiz for you to answer. Over time, Reporter begins churning out the stats behind your habits, and the best part is that it's real data you can use. Once you pay the $4 premium, Reporter will transform you into numbers. [ iOS [24] ]

This year, Microsoft made sharing slideshows less of headache . With Xim, all you do is select photos, add contacts, and press send. Maybe the smartest part of this little app is only the person creating the slideshow needs to download it. Xim sends the slideshow as a link that opens up in a browser, so if your friends, family, or that fun drunk you met last night doesn't know a Xim from a zoo, no worries. The experience is also intimate since all participant actions are shared across devices in real time, like you're flipping through a photo album side-by-side. [iOS [26] , Android [27] , and Windows Phone [28] ] 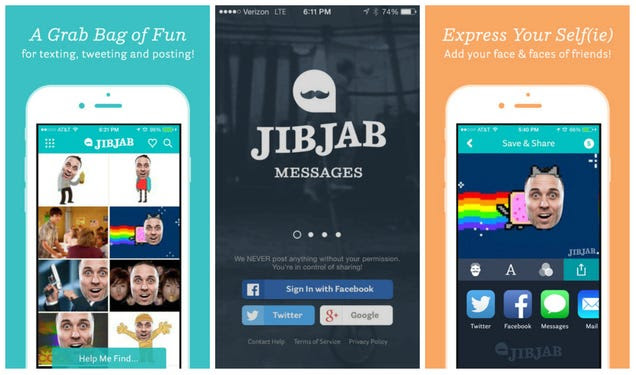 This one is out of left field, but JibJab Messages lets you star in your own bite-sized, ever-looping piece of GIF greatness, and it's incredibly addicting . After coughing up just a $1 after the free trial, you get to make all the GIFs plastered with your (or your friend's) face you wantâ€"and it's super easy to do. Snap a pic, or grab one from your camera roll, and be on your way. Will it help you organize your life? No. Be more productive? Definitely not. Is it fun as hell? You betcha. [ iOS [30] ] 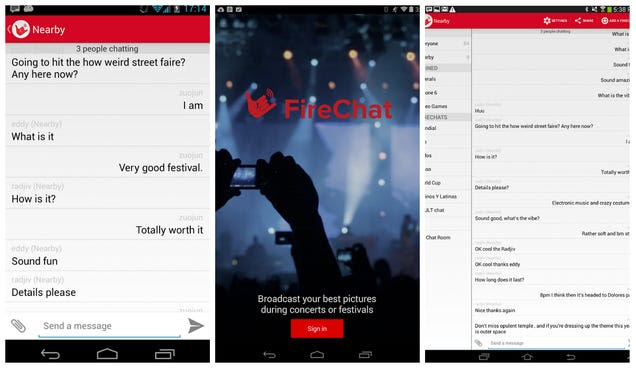 Strangely enough, FireChat isn't the most well-designed, eye-catching, or super useful app of 2014, but it was one of the few that actually made a real, tangible difference in the world . Hong Kong protesters used FireChat's mesh networksâ€"the offline tech that makes chatting with anyone nearby possibleâ€"to send messages without cell reception. FireChat is the perfect app for protest organizers and crowds, but it's "Nearby" function only stretches about 30 feet or so. Regardless, it's a neat app worth having in your arsenal. [iOS [32] and Android [33] ] 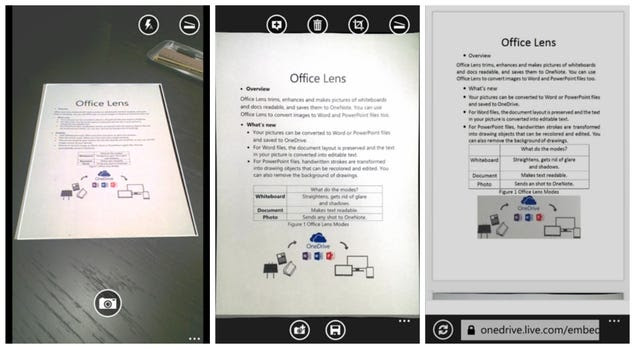 Doing expense reports and just digitizing documents in general is the absolute worst, but Microsoft's Office Lens can snap your messy chicken scratch or printed docs and churn out a digital copy you can share or save to OneNote. BONUS: the photos are also OCR'ed, meaning the text is searchable. That's just all-around neat. [ Windows Phone [35] ] 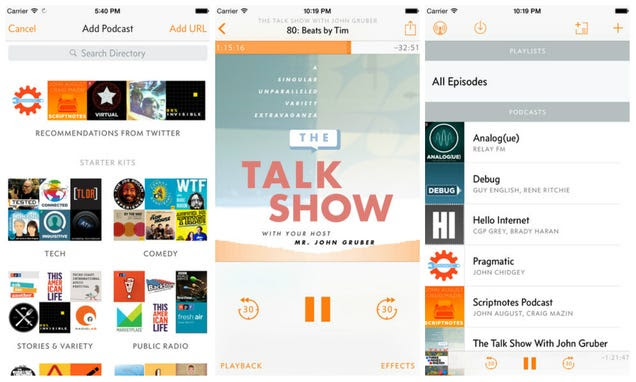 Because of Serial, podcasts are cool again (jk, they've always been cool), and Overcast is the app to help you keep track of them all [37] . The app also has awesome features like Voice Boost, which makes crappy-sounding podcasts less crappy-sounding, and Smart Speed that will cut out long periods of silence so you can actually do some damage to that backlog of podcasts you promised you'd catch up on. Oh, and if you want to make your own podcast, trying using another great app of 2014, Opinion [38] . [iOS [39] ] 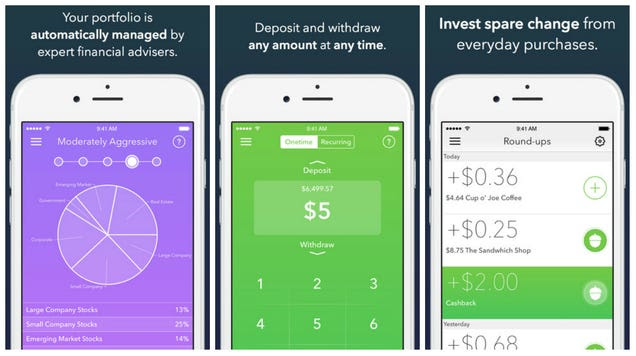 Oh man, investing. Every time I hear the word, I spontaneously get all sweaty and nervous. I'm terrible with moneyâ€"factâ€"but Acorns helps me be less so. The app syncs with your credit and debit cards and rounds up every transaction to the nearest dollar, taking the change and making small micro investments. You can also select how aggressive or conservative you want to be with your investments. Acorns takes a $1 fee every month you're actively investing and a negligible management fee, depending on how much you invest. And if you want to get more involved with investing and stocks, take a look at Robinhood [41] , which is a well-designed app that offers zero-commission trading. [iOS [42] and Android [43] ]

Making music is fun, and sometimes torturous, but mostly fun. That's the whole point of it, and Keezy Drummer perfectly encapsulates that idea. Through incredibly intuitive design and 12 different percussion samples, anyone (yes, even the musically challenged) can create beats that are actually pretty damn good. It's also addicting as hell, so that's a plus. [ iOS [45] ] 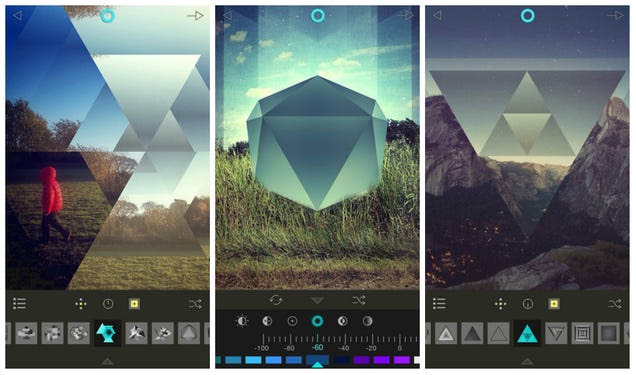 Photo apps are the most bloated category on any smartphone platform (except maybe games), but no photo app looks quite like this. Fragment is an app specifically designed to add trippy after effects to your photos. It takes a little getting used to and spotting what kind of picture is a good candidate for Fragment's acid-laced recreations can be tricky, but once you get the hang of it, your Instagram "likes" are going to quickly multiply. [iOS [47] and Android [48] ] 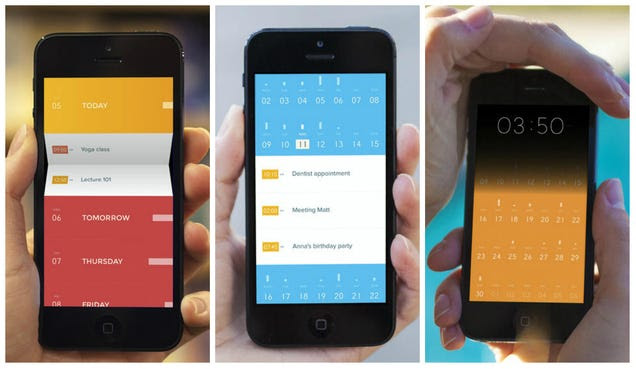 Ah yes, calendars. iOS has tons of them, and with iOS 8/Maverick, even the stock option ain't so bad. But none of them looks like the $2 Peek Calendar. Strangely enough, Peek would feel right at home with Google's Material Design, but this is an iOS-only affair. Peek makes your calendar as simple as possible, opting for gesture-based navigation rather than software buttons. There's a slight learning curve involved but it's worth it. It's best to listen to Yoda on this one: "You must unlearn what you have learned." [ iOS [50] ] 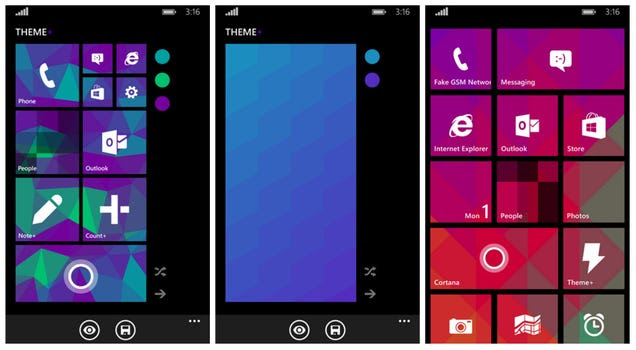 Sometimes, you just want to make smartphones pretty, and Theme+ just does that. My absolute favorite feature on Windows Phone are those constantly animated Live Tiles, they offer infinite possibility for customization and Theme+ is an app that lets you create beautiful backdrops for your homescreen. The app is $1.29, but if the geometric designs are to your liking, it's worth the plunge. [Windows Phone [52] ] 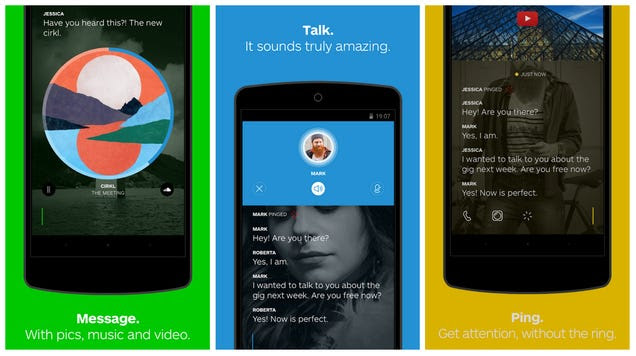 Wire is the direction I want the future of messaging to take: beautifully designed, minimalist UI, and end-to-end encryption. Wire is my favorite messaging platform I've used this year outside of your general fare like Hangouts and iMessages. Wire does have a few things to fix, chief among them being video messaging, but the seamless way to share content, start voice calls, and chat in a great-looking messenger is the texting future I've been looking for. [iOS [54] and Android [55] ] 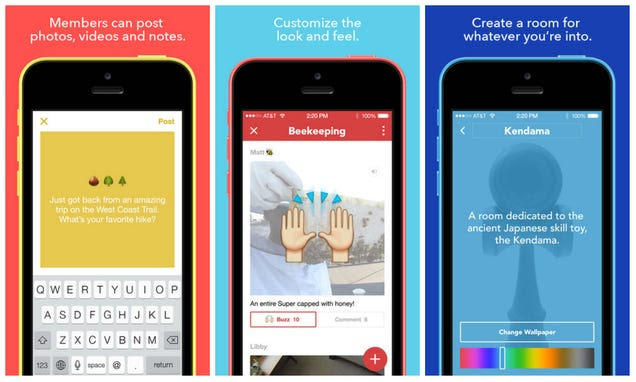 Yes, we know. Another Facebook app . When I first heard about Rooms (and wrote about it ), I wasn't sold at first. The idea seemed completely wrapped up in web 1.0 thinking, had absolutely no search feature, and the idea of using QR codes made me want to punch something. In December, the Rooms team added an Explore feature [57] , so I decided to take another look. I have enough random hobbies (D&D, Japanese baseball, and collecting Fantastic Four com ics from the 1960s) that rooms could be a very powerful tool. It does recreate that web 1.0 feeling where the internet made us all discover that we're not alone in what we like, and Rooms brings us together. [iOS [58] ] 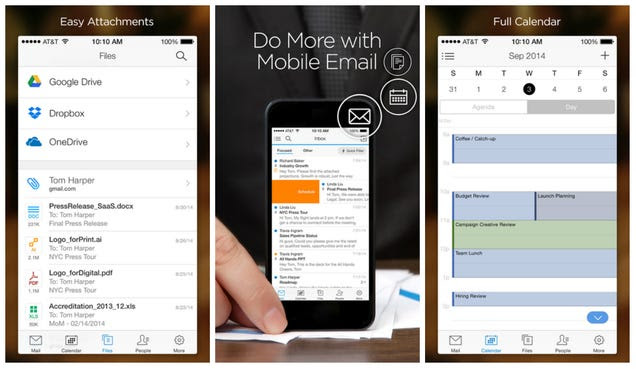 2014 saw lots of inbox innovation. Inbox by Gmail nabbed up most of the headlines, but Accompli, an email client for Android and iOS, is built to help you get some real work done. With easy access to your calendar, Microsoft Exchange support, and quick references to recently emailed contacts, Accompli is email at its most productive. Plus, Microsoft just bought them [60] , so they most be onto something. If you're still searching for ways to get to inbox zero, Accompli can help. [iOS [61] and Android [62] ]

Google Maps is the reigning champ when it comes to smartphone cartography, but HERE Beta is going to try to upset the status quo. There are tons of reasons to love Nokia's mapping solutionâ€"great design, simple interface, speed-limit warning featuresâ€"but its real claim to fame is it lets users download maps for offline use and can be used even without an internet connection. These maps also span the globe, making HERE Beta a pretty attractive option for people who find themselves abroad and don't want to rack up a fortune on their phone bill. [Android [64] ]

source: gizmodo.com
Pubblicato da Illuminator a 7:50 AM
Email ThisBlogThis!Share to TwitterShare to FacebookShare to Pinterest