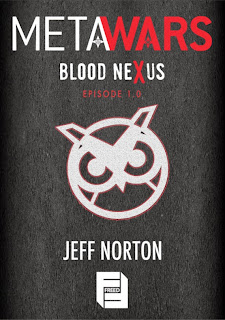 Tell Me About It
Sam Kavanaugh has devoted her life to fighting for the freedom of the Metasphere, a virtual world that offers mankind its only escape from the ruins of reality. When Sam is critically injured during a mission, she discovers that the lines between the digital world and real life are dangerously blurred.

MetaWars: Blood Nexus â€" Episode 1.0 is the first in a trilogy of interactive digital novels set in the MetaWars universe that puts you in control of the action. Join Sam as she battles for survival and make life-or-death decisions to uncover secrets that threaten the future of the Metasphere itself.
MetaWars: Blood Nexus episode 1.0 is an interactive eBook for children aged 9+ which puts the reader in control of the action. It's a prequel to the action-packed MetaWars book series by Jeff Norton.
Available for free download from iBook store for iPad, iPod Touch, iPhone, and Mac from March 20th 2014

If you have followed my blog for a while you would have seen how blown away with the MetaWars Series I was, devouring every book as fast as possible. When I saw that Jeff had teamed up with Freed Fiction to make an interactive prequel, MetaWars: Blood Nexus, for the MetaWars series I could not wait to get hold of it, I stalked the iBook store, stalked the Freed fiction website waiting for updates, and may have stalked Jeff's twitter account for the tiniest crumb of information about when it would be released. Now my stalking may or may not have paid off, but I was beyond excited to find an email from Jeff asking if I wanted to be a beta tester for MetaWars: Blood Nexus. Of course the immediate and obvious answer was no........are you kidding, I replied instantly with YES, and soon found myself with a copy of MetaWars: Blood Nexus.

I work full time, so my usual weekend routine is as follows...

When I got my copy of MetaWars: Blood Nexus all of that went out the window, and for the entire weekend I found myself sitting on the sofa, reading the book, and making sure I tried every single option available to me to make sure it all read well, and emailed with the occasional question. Only when I had finished reading did I attempt to do some of my 'jobs', choosing to leave the rest for Monday.

MetaWars has been a series I have loved from the minute I picked it up, and MetaWars: Blood Nexus was just as engrossing, compelling, and unputdownable. I loved reading this type of adventure book when I was younger, and readingÂ MetaWars: Blood NexusÂ certainly brought back memories of stealing my brothers books to read. I love the whole idea of not knowing what will happen when you turn the page, leaving the path you are going to follow to chance, fate, or just pure luck. I love how interactiveÂ MetaWars: Blood NexusÂ is and that it is you, the reade r, that gets to make the decision of where to take Sam next, her life or death is purely in your hands.

MetaWars: Blood NexusÂ is a fantastic prequel to this world, and can be read before reading the MetaWars series to give you some basic information to work from, or you can dive straight into the MetaWars series now and not feel like you are miss ing out if you have yet to buy this book.

About Jeff
Jeff Norton is London-based writer who dreams up big, immersive worlds and fills them with page-turning stories and awesome characters. Sometimes he writes by himself, sometimes he creates stories two co-write with his friends.

Before writing full-time, Jeff managed the Enid Blyton literary estate. Jeff moved to London from Los Angeles where he'd developed and produced the critically acclaimed interactive movie Choose Your Own Adventure, based on the best-selling books.

Originally from Canada, Jeff lives in London with his wife and two young sons.

source: muchlovedbooks.blogspot.com
Pubblicato da Illuminator a 8:50 AM
Email ThisBlogThis!Share to TwitterShare to FacebookShare to Pinterest