What are your favorite apps of 2013? Vine, Snapchat, Waze

Consumers and tech workers in Pasadena make their picks for the best new app of the year, on Talking Tech with Jefferson Graham.

PASADENA, Calif. â€" You've heard various reviewers chime in with their picks of the new app of the year, but what do you think?

We went out to this Los Angeles suburb to pose the question to folks in front of an Apple Store â€" and to tech workers at the Idealab tech incubator â€" for a diverse offering of app picks.

The most downloaded iPhone Apple app of the year â€" Candy Crush Saga â€" wasn't even mentioned, and we urged folks not to give us the "I use Facebook, Twitter and Instagram" every day line we've heard so many times in 2013. (It does makes sense: They are three of the most popular apps.)

However, two new apps really created a firestorm this year, and folks did indeed bring them up often.

â€" Snapchat (free; Apple, Android). The brainchild of two Stanford students to let students be students, the app lets folks send photos to friends that can disappear within 10 seconds. "Snap everybody, send them the pictures and stuff. It's just like socializing and stuff mostly," says Paul Samaniego, a Pasadena college student." 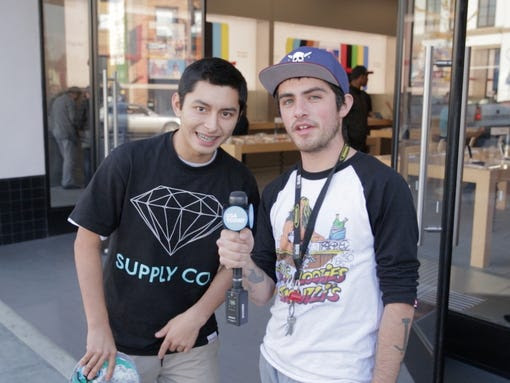 â€" Level Money (free, Apple). A budgeting app for iPhones. It "lets you keep track of your expenses...it basically tells you how much you're allowed to spend each day," says Alba Serrano, a product manager at app-maker Uber Media.

â€" Quiz Up (free, Apple). Dubbed the "biggest trivia game in the world," it's a game you play with others who are connected. "You pick a topic, and challenge everyone else," says Morgan Soloway, Serrano's co-worker from Uber Media.

â€" Heyday (free, Apple). A new kind of blog/journal that can be shared either privately or publicly. "It does cool stuff with images you take, and creates an auto journal for you," says Alan Waldman, a vice-president with tech firm Metacloud.

â€" Evernote (free; Apple, Android, Windows Phone). It's not new, but the note-taking app had an upgrade in 2013. "The updates they made are really great. It's really smooth and easy to use and I use it constantly," says Katie Newell, a community manager for app maker Uber Media.

â€" Mighty Text(free, Android). An app to read texts anywhere â€" not just on the phone. It works on phones, tablets and browsers. "It's what iMessage should be, I can text all of the people in my contact book, it doesn't matter if they're on Apple, Android or Windows," says Randy Sinnott, director of product for Spokeo.

Readers: What's your favorite best new app of 2013? Let's chat about it on Twitter, where I'm @jeffersongraham [1] . I'll be announcing my picks for best apps this weekend on USATODAY.com.

source: www.usatoday.com
Pubblicato da Illuminator a 10:20 AM
Email ThisBlogThis!Share to TwitterShare to FacebookShare to Pinterest