Part of the thrill of 2008 was that all my friends used BBM. Today, the market is much more fragmented â€" every other country has its own favorite messaging app. And clearly, we have yet to find the perfect, do-all solution. Ten million people have already downloaded BBM on iPhone and Android, perhaps because deep down, we all want BBM to succeed. We all want to use just one app to talk to all of our friends, instead of having to switch between several. 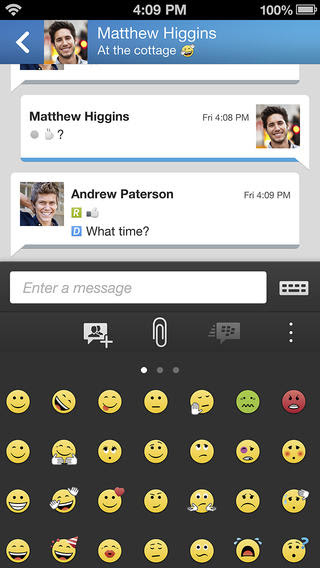 What once made BBM so special was its dead-simple and speedy interface. With a few flicks of the "pearl" or clicks of the keyboard, you could instant message with a friend, or with a whole group of people. Sending images was fast and easy in an age where everyone had no choice but to send slow, low-res "picture messages" via MMS. There were also a variety of innovative mobile-only features, like shared calendars, in a time where apps werenâ€™t yet built with mobile in mind.

BBM forÂ iPhone [1] andÂ Android [2] shares almost nothing with the messaging app I remember from 2008. Its interface now matches the effect of BlackBerryâ€™s BB10 operating system, which means there are slide-out panes and panels abound.

Neither iOS nor Android emphasizes swiping from the edges of your screen to pop out menus, while BB10 does, so the hidden panes on either side feel a bit confusing. Some of the interactions in the app feel like BlackBerry is trying to teach people how to use BB10 within the context of an app on another platform.

Most of BBMâ€™s key features do still exist: one-on-one messaging, group messaging, photo attachments, basic "status" messages you can display like Available and Busy, and even Ping, a functionality I had almost forgotten BBM ever had. With Ping, you can buzz a friendâ€™s phone with just two taps. Only Path has added a similar feature: a "checkmark" button you can tap to instantly buzz a friendâ€™s phone. Itâ€™s like a Facebook poke, but with messaging â€" and is a charming reminder of how useful BBM once was in my daily life. I used BBM so often, in fact, that I had the app mapped to the push-to-talk button on the side of my Blackberry Curve.

source: www.theverge.com
Pubblicato da Illuminator a 6:50 AM
Email ThisBlogThis!Share to TwitterShare to FacebookShare to Pinterest