Put Dunkinâ€™ Donuts on your list of Passbook backers. A confirmation came Thursday that the American global doughnut company and coffeehouse chain is adding support for Appleâ€™s Passbook to its freeÂ Dunkinâ€™ Donuts free mobile app [1] Â for the iPhone and iPod touch.Â This enables customers to add their Dunkinâ€™ Donuts Cards to Passbook and pay for food, beverages and merchandise at participating U.S. restaurants simply by scanning their pass in-store or at the drive-thru.

Balances are updated immediately after purchase and these passes are also location aware, the company saidâ€¦

According to a media release [2] , eachÂ Dunkinâ€™ Pass is location aware so it will automagically appear on a customerâ€™s Lock screen when he or she is near a Dunkinâ€™ Donuts location.

The companyâ€™s app saw more than a million downloads in just over six months and has just been updated with Passbook and iPhone 5 support. 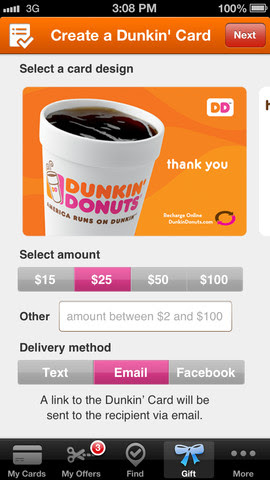 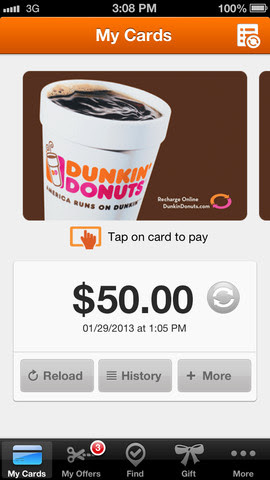 In addition to purchasing, registering and reloading Dunkinâ€™ Donuts Cards, the software can add money to an existing card, set a card to auto-recharge and view all previous card transactions and payments via American Express, Visa, MasterCard and Discover.

Rival Starbucks also rolled out Passbook integration recently, as did many other companies, including airlines , sports teams Â andÂ  retailers , to name just a few.

With the release of iOS 6.1, Apple has restored the Welcome screen in the Passbook application and made it easier to find Passbook-supported apps .

source: www.idownloadblog.com
Pubblicato da Illuminator a 10:50 AM
Email ThisBlogThis!Share to TwitterShare to FacebookShare to Pinterest