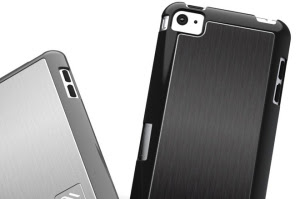 Case Mate's iPhone 5 designs were live on their site briefly in September before the company pulled them.

AT&T retail stores are reportedly taking delivery of iPhone 5 cases a little early, according to a new report. Photos obtained by MacRumors [1] show boxes of new cases allegedly delivered to one AT&T store late Thursday. The cases feature a tapered back design and what appears to be a mute switch opening on the opposite side of the phone relatively to where it’s currently located.

A tapered back redesign is in keeping with some other early case leaks we’ve seen [2]  from Chinese accessory makers and other vendors, although separate rumors have suggested we’ll see a new iPhone that closely resembles the previous generation [3] . One theory is that Apple will unveil two new models of iPhone on Tuesday during its special media event, one of which is a modest evolutionary upgrade of the iPhone 4 as a low-cost option, and the other a complete redesign.

The cases could be fake or based on an uninformed, just-in-case ordering decision on behalf of AT&T or this store in particular. Some have pointed out that the packaging seems unrealistic, but AT&T retail is known to repackage products from accessory-makers in generic packaging. And considering how close we are to the iPhone 5′s reveal — Apple is holding an iPhone launch event on Oct. 4  – it’s more likely that important partners like AT&T would be privy to some knowledge of the next iPhone’s actual design.

Personally, I think we’ll see redesigned hardware, and the tapered look seems to be garnering the most support. For Apple to wait 16 months just to introduce a minor refresh would not go over well with consumers, as we’ve seen from recent survey results .